Add a little bit of savory spice to your meal! This Vegan Cashew Hoisin Stir-fry is perfect for an easy dish, simply chop and dice up the veggies and get cooking! 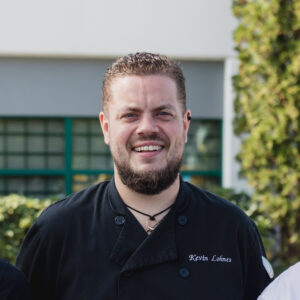 Kevin is a Red Seal certified Chef who has been cooking for over 20 years. He did his apprenticeship at the Hilton and has since worked and lived on a nine-hole golf course and resort in Kelowna called 'Lake Okanagan Resort.' He spent eight years with Joey Restaurant Group and was Executive Chef at Hook Seabar in English Bay. He has loved meat throughout his career and always will, but he does believe in eating less meat and getting more creative with cooking Vegan. "I can only imagine how hard it was to live the Vegan lifestyle 5 or 10 years ago. Now there are so many options and substitutes out there." He looks forward to being Vegan even temporarily, as it will expand his knowledge and help him in his current role as Production Manager for "The Modern Meat."

Modern Gyoza announced as finalised in BC Food and Beverage Awards

Modern Meat is in the running for a BC Food and Beverage Award. The Modern Gyoza has been selected as a Top Ten Finalist for Product of the Year, as selected by a panel of judges.

Modern Meat is proud to sponsor the Vancouver Golf Tour’s (“VGT”) Modern Meat Open on Friday August 7th and Saturday August 8th.  Held at Newlands Golf and Country Club in Langley, the two-day tournament will host several pro and amateur athletes.   The 2021 Modern Meat Open presented by NIKE Golf is an official 36-Hole Stroke-Play Event on the Vancouver Golf Tour with points counting for the 2021 SRIXON/CLEVELAND Order of Merit.

Pea Protein is one of the main ingredients found in all of Modern Meat’s plant-based offerings. It is used as the main source of protein and is an excellent alternative to animal protein. So, what makes it a great choice? Keep reading to find out.